Last week, I talked about the top five hotels in Washington, DC. The kinds of places that you always see DC limousines pulling away from because important people are always going and coming.

But not everybody’s a “swanky hotels” and “limousines” kind of guest. Sometimes, you want a comfy feel for your trip. That’s where DC’s best B&Bs can serve you. The bed and breakfasts in DC are as welcoming as my mom’s house (but without constant texting about not being late for dinner).

Which bed and breakfasts should you stay at? Here are my recommendations.

It’s not that I couldn’t make a decision for the top spot. (Drivers of DC limousines can’t be indecisive.) It’s that Woodley and Embassy are run by the same brothers-in-law, Raymond and Joe, who restored them from run-down conditions.

Both B&Bs feel like modern suburban homes . . . if we’re talking about an upscale DC suburb where Martha Stewart designed every interior. The rooms are full of natural light, and all the artwork is done by guests who happen to be artists. Hopefully you’ll get the Mascarpone French Toast at breakfast—and don’t skip the coffee! (It’s really good.)

Both B&Bs are located downtown, in the middle of attractions and restaurants, and Metro isn’t far. For special outings, DC limousines services can pull right up to the inns.

During renovations, Raymond and Joe installed high-efficiency, green appliances at both inns. So if you’re an eco-traveler, Woodley Park and Embassy Circle are great choices.

Taft Bridge Inn is a restored Georgian mansion. It looks very colonial. It’s upscale and cozy at the same time, thanks to the combination of things like ornate fireplaces and folksy quilts.

Each room is different, but not so different that you can’t tell they’re in the same house. The rooms aren’t spacious—find somewhere else to practice gymnastics—but they’re comfortable. They kind of remind me of the Gryffindor Common Room at Hogwarts.

Taft Bridge is a B&B that keeps people coming back. Some guests have never stayed anywhere else in the capital.

DC limousines often drop people off at Taft Bridge, but there’s on-site parking for a small fee. It’s close to bars and restaurants, and within walking distance of Metro and the National Zoo. 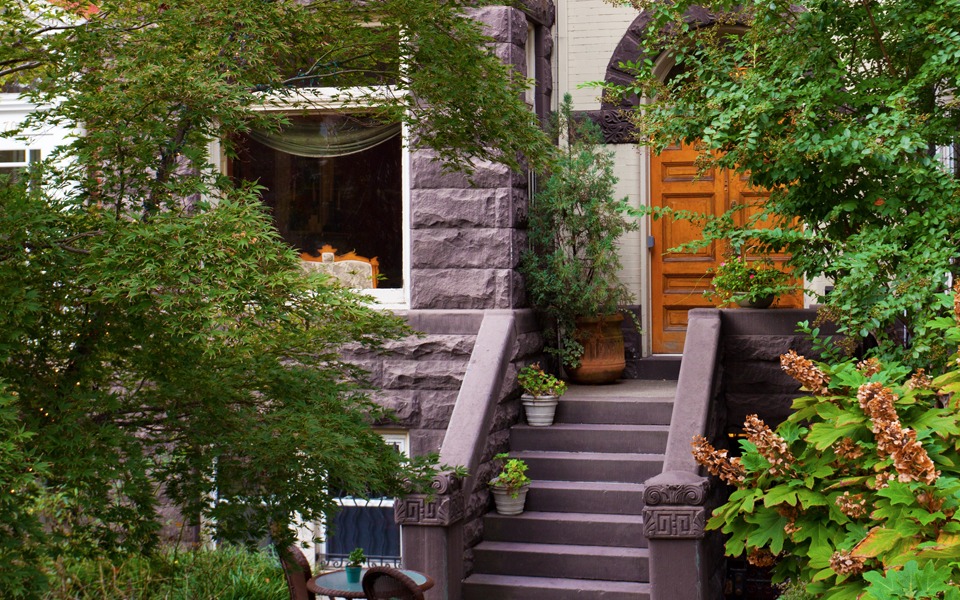 If you’re a writer or artist, stay at Akwaaba.

Akwaaba has seven rooms, each decorated to honor an African American author, or a genre of writing. Some have touches of old-world elegance, such as tall carved wooden bed frames and deep red walls (the Romance Room), and others are more modern (the Langston Hughes Room). There’s also a basement apartment for rent that can sleep up to six people—that’s the Writers’ Retreat Apartment.

Hot breakfast is served every morning at 8:00 a.m., but if you have an early meeting, just tell Joanna, the innkeeper. She’ll make sure you’re fed! She also sets out little treats, like afternoon hors d’oeuvres.

There’s plenty to do in the area, but it’s not within walking distance of most monuments and sights, so some guests use DC limousines for that. It’s also really close to Metro.

Malolo is a newer B&B in DC, in business for about two years. To say it’s inspired by the South Pacific islands is like saying Jim Henson liked puppets. Malolo really is like a bit of the islands in DC. The rooms are simple compared to other B&Bs—not a lot of furniture—but they’re full of light and bright colors.

The hosts, David and Chef George, make up for their newness on the DC B&B scene with super-enthusiastic hospitality. Seriously—these guys are way friendly.

Chef George and David (who’s from the islands) will even pick you up from the airport and drive you to Metro. (They’ll give you a special cell phone to call from when you’re ready to be picked up from Metro!)

And Chef George really is a chef, so the food’s amazing. The banana cake already has a reputation. George will even make your eggs to order.

Be warned—Chef George and David will probably ask you to take a picture with them before you leave!

We drivers of DC limousine Rental have reputations for quality to keep up. If I was going to have to warn you about anything worse than super friendly hosts asking for your picture, that B&B did not make it on my list.